Kids Must Hug Or Kiss As A Mark Of Politeness?

Home Motherhood Kids Must Hug Or Kiss As A Mark Of Politeness?
NextPrevious

Kids Must Hug Or Kiss As A Mark Of Politeness?

Kids Must Hug Or Kiss As A Mark Of Politeness

When a mom posted this about her daughter, I really wasn’t sure what to think about it except that it sounded like my son. 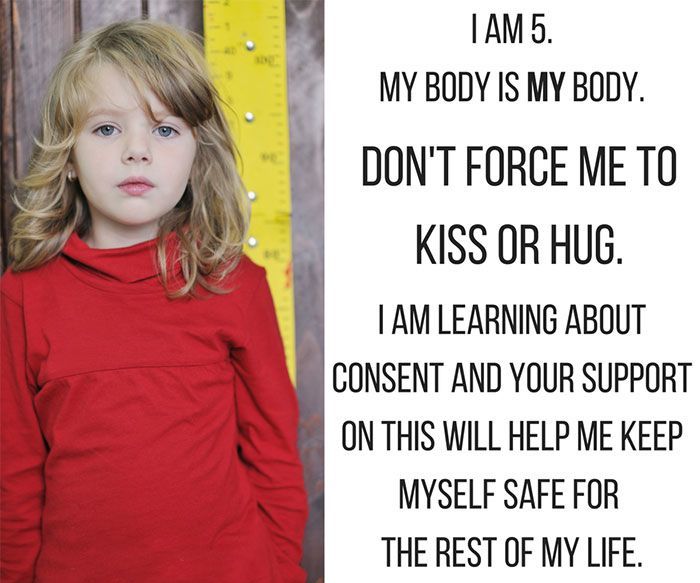 This meme, saying that children shouldn’t be forced to hug or kiss people they don’t want to went viral a few months ago. It also upset many. I myself have been privy to this disdainful act in the past (hugely under societal pressures) leaving my son feeling very uncomfortable. Asking my kids to hug or kiss elders as a greeting came naturally to me. Weren’t we all as children asked to do the same when we were younger? Of course we were!

Today, things are far different. With the internet splashed with cases of child abuse, child molestation, rapes and so much more, I don’t think it’s an unreasonable thing to respect the boundaries your child is setting up for himself. Often times I’ve heard myself telling my children that they never have to be touched if he/she feels uncomfortable — family or otherwise. So how can I force them to expressing affection by extorting hugs.

While there are a lot of people being critical about this meme and labeling such strongly opinionated kids as the harbingers of disrespect towards elders, there is another league of people who believe that kids are great judges of character and if they don’t want someone hugging or touching them, so be it!

At the age of five, or thereabouts, children need a lot of hugs. These should come mostly from their parents & maybe siblings, or other very close family members, with the agreement of both parents. Same goes for kisses. Strangers don’t need hugs or kisses. Children should be able to refuse to hug or kiss anyone they don’t want to and they should definitely refuse any such attention when away from parents or in other rooms!

So we’ve come to decide that we can hug and kiss as greeting, and we do likewise upon departure, but we must remember not to make this a ‘forced’ thing in our homes. Refusing a hug cannot be equated with bad manners or bad behavior. So if one of my kids don’t want to hug or kiss, touching the feet of elders or a polite hand folded ‘namaste’ works equally well.